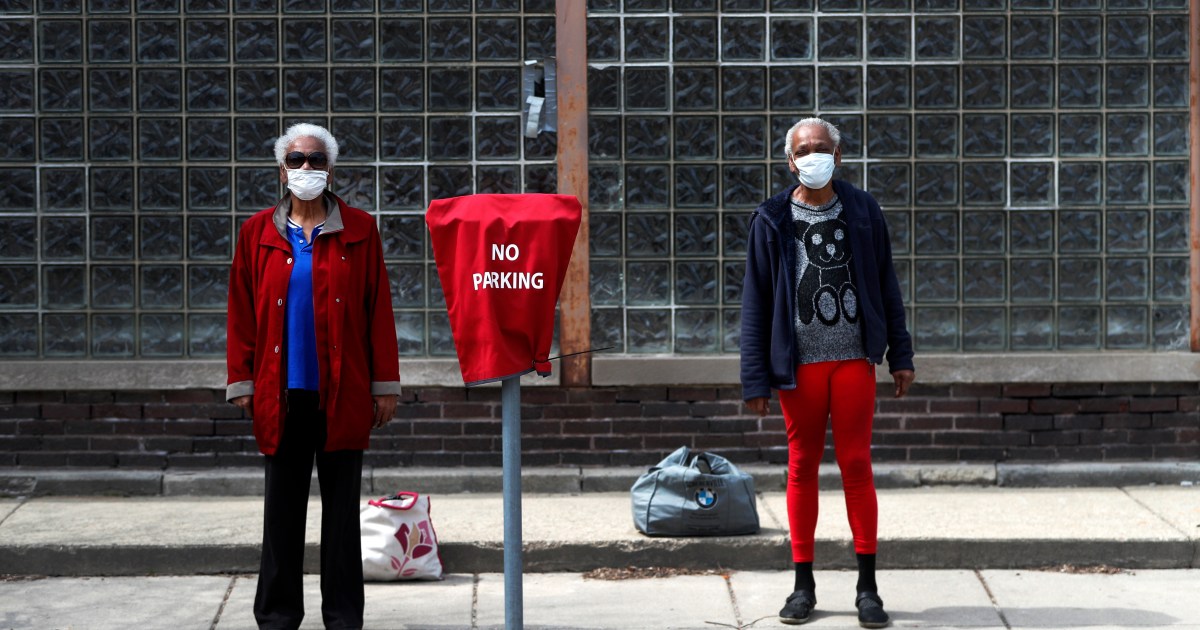 COVID-19 cases are continuing to surge across the United States. The country has seen the highest number of infections in months and the death toll has surpassed 250,000 as of this week.

The pandemic has played out along racial lines in the US, with hospitalisation rates for Black people, Native Americans and Latinos four times higher than for white people, according to the Center for Disease Control and Prevention.

Amidst all of this, many Americans continue to insist the virus is not real – with even US senators speaking from the floor of Congress to insist there is no need for people to wear masks.

“When it became racialised, it was very clear that meant it was no longer going to be a national health emergency. It was just Black people and Brown people,” Reverend Marshall Hatch, the senior pastor at the New Mount Pilgrim Missionary Baptist Church in Chicago, Illinois, told Al Jazeera. “[It] was people who are lower-class workers who are at risk so therefore the rest of us can just get on with our lives.”

In October, Fault Lines travelled to Chicago to report on the effect of the pandemic there. Like the rest of the country, the virus has disproportionately affected communities of colour in the midwestern city, one of the most segregated in the US.

Reverend Hatch’s sister and his friend took health seriously – and wore masks to try to protect themselves, he said. The west side of Chicago, where the reverend preaches and his sister lived, was hit hard when COVID-19 first began to spread – part of the racialised effect the virus has had.

When COVID began to take hold earlier this year, nearly 70 percent of deaths in Chicago were Black residents even though they make up only 30 percent of the city’s population. Among the first deaths was Phillip Thomas, who died from COVID-19 on March 29 at age 48.

His sister, Angela McMiller, told us her brother, a diabetic, had started to feel ill and self-quarantined at home at the recommendation of his doctor. The last time she spoke to him was when he was in the hospital.

Thomas lived in South Shore, a neighbourhood on Chicago’s South Side that has seen some of the highest numbers of deaths from COVID-19. By the end of October, more than 3,000 people had died in Chicago, the majority of whom were Black and Latino.

“Some of the biggest things that impacted death rates were seniors; it was underlying health conditions, it was a lack of access to healthcare. Those things are deeply racialised, deeply fall along the lines of poverty,” Candace Moore told Al Jazeera.

Moore is the first chief equity officer for the city of Chicago. The mayor’s office launched a Racial Equity Rapid Response Team in April to address the disproportionate effect of the virus in communities of colour. “The sort of recipe for impact existed at base so that when a disease like COVID lands, it falls right onto the map of inequality that exists already.”

The zip code with the highest death rate is in one of the city’s predominantly Mexican American neighbourhoods, Little Village. As the pandemic has continued, in Chicago 42 percent of deaths have been Black residents while 33 percent have been Latino residents. In the Latino community, city officials and community organisers attribute part of this statistic to Latinos often being essential workers and many being undocumented and not having access to healthcare.

“You do see, over the months, a little more safety stuff at work, but in those first several months you saw very little,” said Leone Bicchieri, executive director of the organisation Working Family Solidarity. “But who was still working? If you look at these work sites, very few white folks are going. It’s almost all Black and Latino. That played a huge role.”

He told Al Jazeera another issue is housing. “People are cramped into housing complexes. You’re living all on top of each other. And for a lot of the Latino families [are] living many families to a small unit.”

The disproportionate effect of the pandemic on communities of colour stems from systemic issues that have made these communities more vulnerable.

“All COVID did was plant itself into the social fault lines that preexisted,” said David Ansell, author of the book, The Death Gap: How Inequality Kills, and a physician at Rush University Medical Center in Chicago.

“We’ve created a society that has put white on top and Brown and Black on the bottom. The rich on top and the poor on the bottom, and we’ve overlapped those categories and the services that we provide – whether it be school, housing, healthcare – have all been layered in the exact same way. That has effects on the body.”

Even before the pandemic began, wide health disparities were playing out in Chicago. Between the wealthy and predominantly white neighbourhoods in downtown Chicago and predominantly Black communities on the south and west sides, the life expectancy gap is as wide as 17 years according to city data.

Many of the city’s Black and Latino neighbourhoods also overlap with food deserts – a lack of access to fresh produce – and higher pollution rates. All of this is a reflection of the city’s deep and ongoing segregation that started decades ago.

In a period now known as the Great Migration, from 1910-1970, millions of African Americans left the south and its racist Jim Crow laws for industrial cities in the north like Chicago. When they arrived from the south, they were legally blocked from living in certain neighbourhoods and denied federally-backed loans for homes in the areas they did live in. Many could only buy homes at inflated prices through predatory contracts – resulting in the theft of their wealth and equity. The ramifications of that discrimination are still felt today.

“We can be in Austin [on the west side] in a beautiful six-bedroom home and the house is maybe worth $100,000. If I pick that house up and take it to Lincoln Park [in the north side], it’s probably worth a million dollars,” said Tenisha Jones from West Side United, an organisation working to address health inequities in Chicago that has partnered with the Mayor’s office in their COVID-19 efforts.

“That housing has played a critical role in our people’s ability for upward mobility. It’s just thinking about the stark difference in the pricing of a home and how challenging it is for African Americans to build generational wealth.”

These housing issues have translated into a critical deficit that feeds the health disparities COVID-19 exposed – resources that are available in communities. One central problem that accompanied the city’s segregation and discriminatory policies is divestment – the desertion of businesses and the jobs that came with them. Community organisations are working to combat these problems and transform their neighbourhoods after decades of neglect.

In West Garfield Park – a majority Black neighbourhood that sees high levels of premature death – the MAAFA Redemption Project, part of Reverend Hatch’s church, is working to close the life expectancy gap and rebuild the neighbourhood.

“Chicago’s original sin, as the country’s original sin, has been racism [and] particularly in this city, residential segregation,” said Marshall Hatch Jr, the Reverend’s son and the executive director of MAAFA.